skip to main | skip to sidebar

Back from outer space...

After more than a year, marriage, several jobs and a lot of thinking, I'm restarting this blog. Nothing is changing in this world, and nothing is being done to right the wrongs. At least I plan to say something about it, and hopefully be heard.
Posted by Qasim at 4:07 PM 1 comment:

Earlier, I wrote an article about the irony and inconsistency surrounding the recent Afghan elections. The unofficial tally has incumbent Hamid Karzai sitting at 54.6%, and nearest competitor Dr. Abdullah Abdullah at 27.8%. That's not fishy at all, unless you remember that nobody likes Hamid Karzai.

Do I even need a punchline here? This is one of the clearest cases of foreign policy meddling I have ever seen. Hamid Karzai is a infinitely controllable little puppet, and it's in the U.S. government's best interest to keep him in power. That's reason enough to hamper investigations into this blatantly rigged election, and ruin the career of a man who's served his country for 30 years.

Does anyone remember when the government used to be subtle in it's meddling? Oh wait... Never mind.
Posted by Qasim at 10:56 PM No comments:

We don't need no water, let the motherf**ker burn...

Abu Ghraib. Originally, Saddam Hussein used it to house political prisoners and commit acts of torture.
After the U.S. invaded Iraq, the Americans used it for the exact same purpose; this time in the name of "freedom". It was only after pictures of detainee abuse by American troops surfaced that it was shut down.

Now the prison is open again, back in Iraqi hands. Same old story, only this time it's being renovated to hold five times as many prisoners as it held during Saddam's rule. Guess what? Some people are pissed.
Posted by Qasim at 12:58 AM No comments:

There's a lot of talk about Iran's nuclear weapons program. Before we start the debate, perhaps we should first look at who originally funded Iran's nuclear ambition.

Who gave them the technology? The equipment? Was it the Soviet Union? China? Some nefarious rogue state? Who, then?

It was the same guy who also helped screw up Vietnam: U.S. President Lyndon B. Johnson and vis-a-vis the American government.


American pro-Iran propaganda from the 70's:

Do you want to know why Netanyahu agreed to a temporary settlement freeze? Because it changes absolutely nothing. The freeze does not include buildings under construction.

This means that building can continue almost unimpeded, while making Israel appear benevolent and conciliatory. If the Palestinians reject this "generous" deal, it makes them look uncivilized and greedy. And in the end, the Israelis have appeased the Americans, and Obama has appeased the masses. Where does that leave the Palestinians?

Screwed, as always.
Posted by Qasim at 5:25 PM No comments:

It's okay to commit fraud... When?

Does anyone remember not too long ago, when Iran's national election results came in? The incumbent won re-election by landslide, despite being unpopular both locally and abroad. Remember the allegations of fraud, the massive protests? The western media was in outrage at the idea of a rigged election, and gleefully took that opportunity to bash Iran's leaders.

Now, we sit at the conclusion of Afghanistan's national elections. A strange sense of deja vu permeates here. Again, we have a very unpopular incumbent running for re-election. But yet again, this person was shown to have a great many more votes. Again, accusations of fraud abound. At least 600 serious cases of it.

So where is the outrage of the western world? Where are the cries in protest of this affront to fledgling democracy? The difference is that the man accused of fraud in this case is Hamid Karzai, America's puppet in Afghanistan. The media seems very quiet this time around. Huh.
Posted by Qasim at 2:35 PM No comments: 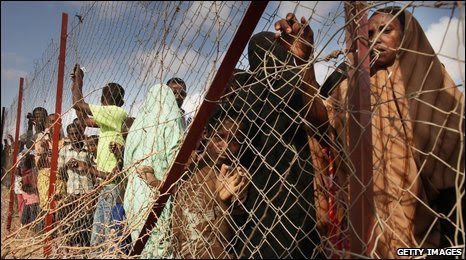 Things are going downhill in Somalia. This is saying something, since Somalia has had no discernible government or economy in 20 years. Ruled by a succession of warlords, plagued by constant fighting. The people rely almost exclusively on humanitarian aid.

Now, Islamic fighters and government forces clash over territory in increasingly violent conflict. What has the civilized world done about this? I would like to say absolutely nothing, but we've actually done worse.

The U.N.'s (read, U.S.) intervention in Somalia in 1992 was very well-intentioned, an attempt to provide infrastructure and relief. However, the end result is that they destroyed what little was left of the country, and then abruptly left. They are now arguably worse off.

Fast forward to today. The one chance the region has for stability does not lie in the current government. The government there has a reputation for being currupt and useless, and nobody really holds any hope for their success. However, money, logistics and material support from foreign sources continue to be squandered on bureaucrats who line their pockets with wealth and leave the people to starve. Why? Because it's better to deal with the devil you know.

See, the other option is an Islamic state. And as we all know, Islam is evil. Right? Never mind that Somalia is a traditionally Islamic country, or that Islamic government is generally better at managing corruption and fulfilling the needs of the people. The powers-that-be would rather the entire country starve than have it under the control of people they don't own.
Posted by Qasim at 12:02 AM No comments: